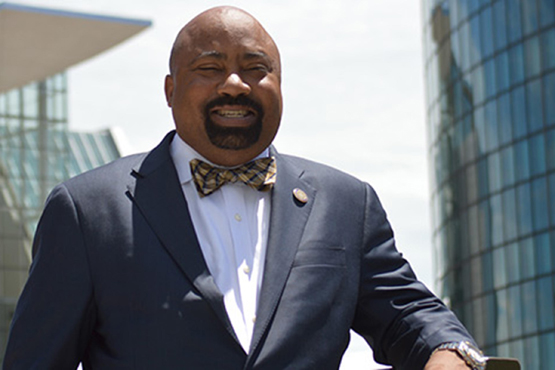 Adam M. Cloud, a lifelong resident of the City of Hartford, brings to the City Treasurer’s Office more than 20 years of experience in financial services with leading institutions. A former Director within the Public Finance Group of Advest, Inc., Mr. Cloud structured several billion dollars worth of bond transactions which financed infrastructure such as schools, parking facilities and student housing. Locally, Mr. Cloud’s financings included The Bushnell, UConn and the Connecticut Children’s Medical Center.
The Hartford City Treasurer is an elected official who, pursuant to the Charter of the City of Hartford, is the custodian and investor of all City funds. As City Treasurer, Mr. Cloud is responsible for an investment portfolio of approximately $1 billion dollars. He also administers the City’s deferred compensation program and its pension benefits. He serves as co-issuer with the Mayor of all City bonds and he invests and disburses City trust funds. He oversees the City’s banking services, including investment of the City’s $540 million budget. Through the City’s Economically Targeted Investment program, Mr. Cloud maintains investments that promote economic growth, development and job creation in the City of Hartford.
Mr. Cloud was also a Managing Director of Loop Capital Markets, a leading minority-owned public finance and capital markets firm. Mr. Cloud leverages his deep experience in financial services in his role as Treasurer of the City of Hartford. Mr. Cloud’s personal commitment to service has included serving as Chairman of the Hartford Redevelopment Agency, Vice Chairman of the Hartford Economic Development Commission and Treasurer of the Democratic Town Committee. Mr. Cloud has also represented the City of Hartford as a Commissioner of The Metropolitan District Commission, as a Director at the Hartford Library and as an Incorporator of the Wadsworth Atheneum.
Prior to his 2011 election as the first African American male City Treasurer, Mr. Cloud served as Assistant City Treasurer. Mr. Cloud attended Howard University in Washington, D.C., earning both a bachelor’s degree and a law degree. He resides in Hartford with his wife and their three children.
FaLang translation system by Faboba

The Role Of The City Treasurer